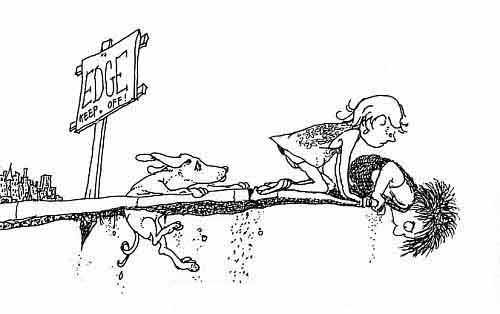 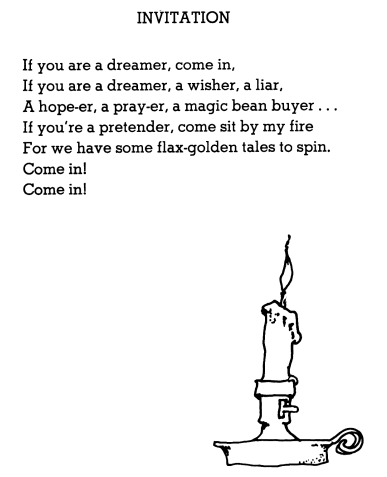 When I realized that this was the 40th anniversary of Sidewalk, and that I had a copy of it that I bought used from a friend, I decided to pull it out and give it a whirl. To tell you the truth, I’ve had this one riding along in the car with me for a few months and I’ve been reading it as I wait around, dropping off or picking up teenagers. Reading this kind of stuff in the car goes a lot further than reading Dickens when you only have a few moments. 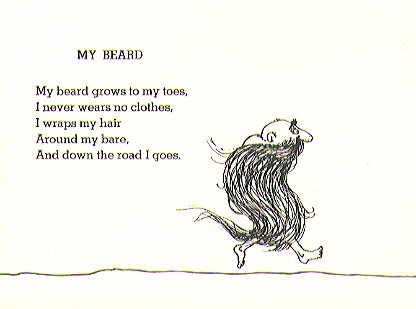 If you’ve never read any Silverstein, or if it’s been decades, I encourage you to pick some up, giggle and admire his artwork. Maybe celebrate the anniversary of Where the Sidewalk Ends by reading this one. He’s the poet’s poet, when you’re in the fourth grade.

She drank from a bottle called DRINK ME
And up she grew so tall,
She ate from a plate called TASTE ME
And down she shrank so small.
And so she changed, while other folks
Never tried nothin’ at all
-Shel Silverstein

2 thoughts on “Where the Sidewalk Ends – by Shel Silverstein”

Leave a Reply to April @ The Steadfast Reader Cancel reply

It was great time with my Big Book-Book Club last Saturday. With a last minute change of location, we still managed to get together and chew on East of Eden by John Steinbeck. The weather was perfect, the company, divine.
Pretty pleased with this cashew chicken I made on a whim. I mean, I followed a recipe, but I didn't have a plan for it. I was amazed I had everything I needed including cashews in the freezer! Threw a few leftover shrimp in there because I didn't have much chicken. It tastes yummy! Asian dishes don't always turn out great for me.
My summer reading stack. Beach Music took me over a month to read. (There's a whole lot of words in that one. A. Whole. Lot.) I buddy read it with @_the_bookish_blonde_ and she knocked it out in a few days.