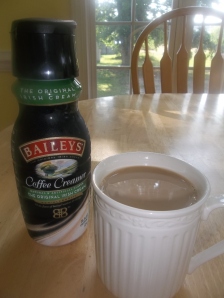 Today is the day, if you live in Dublin, that they are celebrating the life and works of James Joyce. More specifically the day is in honor of Leopold Bloom, the protagonist in Joyce’s highly acclaimed and wildly controversial Ulysses. This annual celebration occurs every June 16th, commemorating the day the novel takes place. If you didn’t know this already, all the events told in the book take place on that one day in 1904, and I gotta tell ya… it was the longest day of my life.

Now, there is much to be said and has been said about the genius of this piece of literature. The way that I read it is not the way I would recommend. As I have said about several of the books on this LOST challenge, I would have benefited greatly by going through this book with a class and  a professor that thinks it’s the best thing ever, exuding enthusiasm in each lecture. That’s the way to do it. I was just reading it to check it off a list. I wasn’t invested and I wasn’t super interested. I actually had considered leaving this one off of my challenge and replacing it with a few other books  I had seen on other LOST lists. I read three books in place of Ulysses early on but eventually realized that the whole point of taking this challenge was for the sake of the challenge. So A Christmas Carol, Shane and Fahrenheit 451  wound up being bonus books for me and I resolved to tackle the beast.

Some things you should know when approaching Ulysses:

1.) It’s great to have previous exposure to other Joyce works, especially Dubliners and A Portrait of the Artist.

2.) Exposure to or understanding of The Odyssey. (Ulysses is the Latin term for Odysseus)

3. A general history of Ireland, especially  it’s relationship to England.

I am a miserable failure in all of these. So you can imagine I was incredibly lost.
Oh my gosh!!! Maybe that is the connection to LOST! I was convinced there was no connection, other than when we see it on screen! I felt at times like I was about to lose my religion trying to get this one down, and with no payoff! But now I see, at least for me, this book was on LOST because anyone reading it, HAS TO FEEL LOST!!!!
(Ok, I don’t really think that was the reason, but it’s reason enough for me.):)

It took me six months to read this one. Of course I wasn’t reading it all the time, but until I finished it, it sat there… mocking me. I had planned to read it in January but I began it in December because Roof Beam Reader gave a little shout out to whoever was interested, to join him in a Read-along. I decided to go ahead and jump on it, and take advantage of  his analysis along the way. I kept up with the read-a-long for the first couple of checkpoints then I began to fade. I knew I would get it all done but no way was it going to happen in a month’s time.

Ulysses is a day in the life of two men, Leopold Bloom and Stephen Dedalus. They go about their lives and business in Dublin on June 16, 1904. Leopold is married and is concerned that his wife is having an affair. Stephen has just experienced the death of his mother. I could usually tell where they were and I could even tell when it was funny, but I could not keep up with their thoughts for anything. So much of this book is what is called “stream of consciousness”.  Fragments of thoughts went on for pages and pages. Sometimes it was hard to keep my eyes from just glazing over. There were a few things that were nice to read but these things were like needles in a haystack.

One thing I read that was so profound, I mean it really caused me to stop reading for a minute, was when the narrarator was talking about suicide and the way that people used to respond to it in the aftermath.
“They used to drive a stake of wood through his heart in the grave, as if it wasn’t broken already.”

And then this: (which I thought was so great I posted it to my facebook status.)
“Miss Kennedy sauntered sadly from bright light, twining a loose hair behind an ear. Sauntering sadly, gold no more, she twisted twined a hair. Sadly she twined in sauntering gold hair behind a curving ear.”

“People could put up with being bitten by a wolf but what properly riled them was a bite from a sheep.” (Preach)

So there were these lovely moments and then there were moments when I said, “Ew!”
I’m pretty sure that every bodily function and human behavior is mentioned. All of them, really openly. Blech.
And about the last 50 pages or more, were all one sentence. No lie. 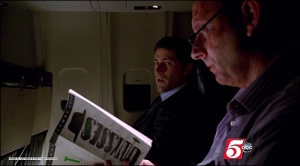 LOST Connection
Other than what was mentioned above, we see Ulysses on film when Jack and Ben are aboard Ajira Airlines, on the way back to the island. Ben is reading the book and Jack looks over and says, “How can you read?” (inferring, “at a time like this”)
And smarty pants Ben says, “My mother taught me…”  Bold face lying again cause his mother died in childbirth.

That’s all I got.  Coyote Mercury has awesome insight on how the book and show relate. Without him and Roof Beam Reader I wouldn’t know jack.

There just may be a Bloomin Onion at tonight’s dinner.
Now, somebody go get me a trophy! 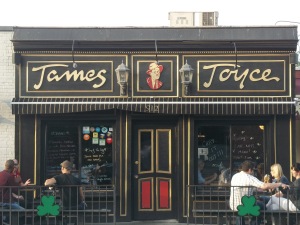 Mike and I had lunch at this little spot on a weekend trip. I couldn’t believe it, we found it when I was still reading Ulysses!

3 thoughts on “Ulysses by James Joyce”