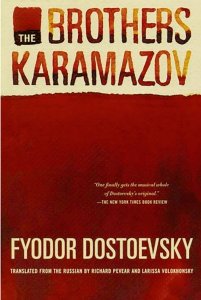 You better believe I’m going to review this for #weekofreviews. I get bragging rights for reading this one. To be honest, this one was not even a chore. I enjoyed it very much, but I took a l-o-n-g time to go through it. Think of this review as a primer for a Russian literary tomb. Let’s get to it, shall we?

The Brothers Karamazov is the story of three brothers and their wretched scoundrel of a father. It’s a family drama, a philosophical exploration and a whodunnit mystery all in one. One of my favorite quotes about TBK is found in Slaughterhouse Five by Kurt Vonnegut:

“Rosewater said an interesting thing to Billy one time about a book that wasn’t science fiction. He said that everything there was to know about life was in The Brothers Karamazov, by Fyodor Dostoevsky.”

And from Madeleine L’Engle, in speaking about flawed art in her nonfiction book, A Circle of Quiet:

“The truly great books are flawed: The Brothers Karamazov is unwieldy in structure; a present-day editor would probably want to cut the Grand Inquisitor scene because it isn’t necessary to the plot. For me, The Brothers Karamazov is one of the greatest novels ever written, and this is perhaps because of, rather than in spite of, its human faults.”

ALL KINDS of things in this book are worthy of contemplation. There are some places that are obviously symbolic. Sometimes I think readers are looking for statements and worldviews in a book that perhaps the author never intended to create. But then, there are other pieces of literature that are heavy laden with thought, beliefs and social commentary. I believe this is one of those.

Here’s what you need to know if you want to read The Brothers Karamazov.

1. Russian names: One thing that can be confusing is the use of nicknames. You have to catch on to these pretty quickly in order to keep up.
Alyosha aka Alexei
Dmitri aka Mitya
Ivan. I think he’s just Ivan. My memory fails me.
Nikolai aka Kolya
You get the gist…

2. It’s long. But the chapters and sections are divided in really doable amounts so that should not be an issue. I get a little fussy about long chapters and this one did not irritate me.

4. There is some really beautiful language and thought in this book.

5. There is all kinds of online help if you have trouble keeping up. I read this one probably four or five years ago and I found a couple of professors on youtube lecturing on different parts of the book. This book would make an excellent semester long study for college students. I would take that class. Like now.

So, I didn’t get much into the summary here in all my rambling but in short, Daddy Karamazov, the scoundrel, is despicable and has basically cast off his three sons, now grown, to different people to raise. Aloysha, the youngest, seeks a life in the monastery and serving God, Ivan finds his pleasure and worth in Intellectualism and Dmitri, unfortunately, is a chip off the old block and is a lot like his father in behavior. But not in heart. This is their story and it’s no spoiler to share with you that at some point, someone makes an end of Daddy, and you, the reader, get to follow along to find out who. It’s good ya’ll. Even if there are some confusing moments. And some boring ones as well.

The end was very exciting. It didn’t end the way I thought it would, but you know, that’s life for most of us.

makes it’s appearance in LOST in season 2 when Ben, aka Henry Gale, is locked in the gun closet in the underground hatch. He’s being held there because he’s suspected of shenanigans. Locke brings him something to read to pass the time.

Ben looks at the book. “Dostoevsky…. You don’t have any Stephen King?” 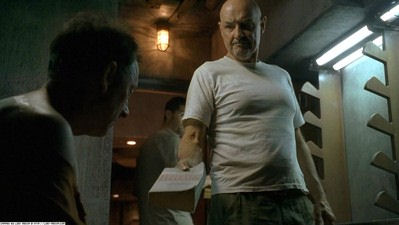 Alright ya’ll, don’t be scared. You need to read this book!!

4 thoughts on “The Brothers Karamazov by Fyodor Dostoevsky”

Ten years ago today, LOST aired it's series finale. (And I have nothin but love for the finale, so don't come at me with your complaints, hehe) I recognize that I love this show more than someone should love a TV show, but I can't lie, it came at time when my kids were young, I was home with them and I craved adventure. I couldn't go on Survivor but I could watch that new Island show coming on. I still talk about it, I still pop in my DVDs to watch when I'm in the mood, I'm still on the reading track it put me on and I still think there has never been a better show on television. (And I like quality TV.) Thank you LOST for what you taught me and for how you entertained me. "Everything I did, I did for the Island." Namaste. 💙💚 #LOST #livetogetherdiealone #guyswherearewe #dude #donttellmewhaticantdo #seeyouinanotherlifebrotha #smokemonster #soiguessimoutofthebookclub #theothers #oceanic815 #lostbookclub #damonlindelof #carltoncuse
⭐⭐⭐⭐⭐
So thankful for the life of this man who beautifully led believers to connecting the mind with the heart. His wisdom, intelligence and logic exceeded any other I've ever heard. His compassion and respect for the skeptic was beautiful. I wish so much I had a brain and heart like his. I'm looking forward to meeting him in Heaven. #letmypeoplethink #thankyouravi #ravizacharias